ONE CHURCH AT ACTS 2

One Church is an extension campus of Acts 2 United Methodist Church in Edmond, Oklahoma. When Acts 2 looked at where their congregation lives, they found most of their members lived outside Acts 2’s immediate vicinity. One Church was born out of this realization with the aim to engage the demographic of the neighborhoods in their immediate area, and to reach out to the people in their neighborhood and draw in new people. The One Church worship services are created to be comfortable, relatable and non-intimidating, so everyone feels welcomed and accepted. One Church still carries the core values (DNA) of Acts 2 and does not differ from the vision with which Acts 2 was founded – a new church for new people.

Acts 2 was already a client of Koch Communications when they began developing their One Church campus. This new campus would engage young adults, which was the audience living in the area surrounding Acts 2. They came to the Koch Comm team looking for guidance on how to communicate their vision to their congregation and appeal to young adults and families. They also needed a brand for One Church that would reflect that vision.

Koch Comm began the process with an interactive discovery session. An initial survey and collaborative meeting were key steps to gather insight for the new brand. The activities and discussion during the meeting helped the Koch Comm team become deeply familiar with the One Church vision and goals, and ultimately Koch Comm used this information to inform the creative process throughout the entire project.

During the interactive discovery session, Koch Comm helped the Acts 2 team identify where their vision overlapped and where there were gaps. Branding development began by using what Koch Comm learned from the discovery process and translating that into a series of logo directions.

The Acts 2 team agreed they liked the juxtaposition of using traditional symbols of their faith with modern elements to appeal to a younger audience. They liked the idea of using symbolic or meaningful design to subtly express their values through the logo. They also foresaw One Church being actively engaged in their community outside the walls of the church. That translated into using outward pointing arrows in the design options. The discovery session also helped identify that Acts 2 wanted One Church to be inclusive to all people from all walks of life; that would be symbolized through the use of circles in the designs.  This information was used to develop five different concepts that were presented to the client.

Each concept was presented to Acts 2 with the rationale of how each fit with their vision, goals and organizational values. Acts 2 was able to immediately see how the elements of the logo options tied back to their feedback. A few of the options presented are included below.

Acts 2 chose a logo from the initial presentation consisting of arrows that also form a cross. The arrows point in multiple directions symbolizing the way they wanted One Church to live and be seen. Inward. Outward. Upward. They wanted the feel to be inclusive, friendly and warm to match their focus on community and growth. The cross is reminiscent of the Celtic cross, an important symbol of their faith and representative of the interconnectedness between One Church and the community. 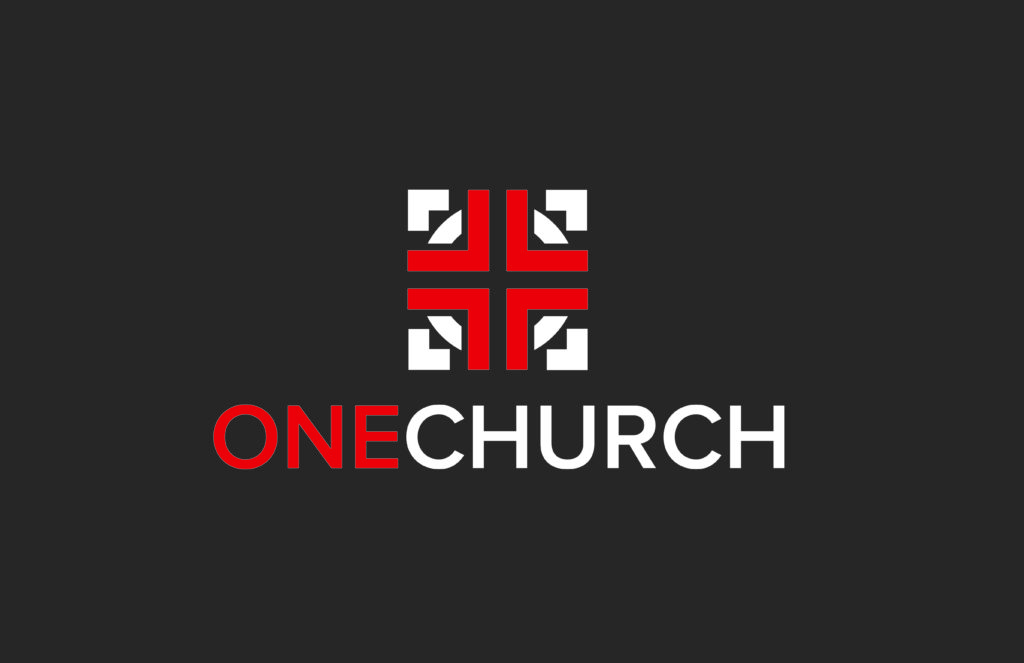 After the client chose the logo, the Koch Comm team presented a full mock-up of the logo and branding in different color variations. The mark was created to work in a wide variety of mediums and to have flexibility for the icon to be used with or without the wordmark. The colors red, white and dark gray were chosen because of the close ties they have to the parent church’s color scheme of red, white and black. Swapping the black for a dark gray was a way of modernizing and softening the approach. Each of the colors has meaning as well – red is a strong color that speaks to passion, hunger, love and symbolizes the blood of Christ; the gray is a neutral, calming and friendly color; and white symbolizes purity and light.

The client has implemented the new logo and brand across all of their collateral. The branding development was driven by Koch Comm’s process, beginning with the interactive discovery session. This collaborative process reduced surprises and created a final product that had everyone’s buy-in.

One Church hosted their first preview service on January 8, 2017, and have since launched as a campus meeting for worship every Sunday.  The One Church logo also won a bronze award in the Elements of Advertising – Visual Logo Design category in the 2017 Oklahoma City American Advertising Awards.